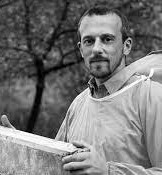 Diego Pagani born in Borgomanero (Novara) in Piedmont on 11/10/1973. After following artistic studies that led him to work in the field of illustration/ photography and other different work experiences, he came in contact with the beekeeping that has always been part of the family activities. His father had practiced as an amateur for a few years and his uncle had a large professional company.

He began a training in beekeeping at the beginning during all weekends and subsequently decided to give them more and more time at the expense of other activities. The time spent among bees, the contact with nature and the fascination for the continuous study of this wonderful world are the reasons that made him decide at some point to try to make a change of life and make it a full-time activity, his job. He immediately approached organic beekeeping, and he decided that this was the way he wanted to work and his company got immediately certified. He became a member of the CONAPI in 2001.

In 2008 he was elected president of CONAPI, a position that he still holds today. The cooperative CONAPI is the largest organic honey producer in Europe, representing 110.000 hives all over Italy and over 600 beekeepers associated.